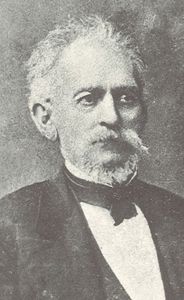 SMITH, ASHBEL (1805–1886). Ashbel Smith, pioneer doctor and leader in the development of Texas, son of Moses and Phoebe (Adams) Smith, was born at Hartford, Connecticut, on August 13, 1805. He has been called "the father of Texas medicine" and "the father of the University of Texas." He also made valuable contributions to Texas in the areas of politics, diplomacy, agriculture and ranching, warfare, finance, transportation, and immigration. After graduating from Hartford Public School and Hartford Grammar School, Smith attended Yale College. By the time he was nineteen he had earned A.B. and A.M. degrees from Yale, where he was made a member of the Phi Beta Kappa honor society. After a year and a half of teaching in a private school in Salisbury, North Carolina, he returned to Yale to study medicine and earned the degree of M.D. in the spring of 1828. He did a subsequent two-year stint of teaching in North Carolina, then studied medicine in Paris for a year. During the Paris cholera epidemic of 1832 he helped treat the sick and wrote and published a pamphlet on the disease. Upon his return to the United States around 1833 Smith established a successful medical practice in Salisbury, North Carolina. He was involved in politics in that state and became editor and half owner of the Western Carolinian, a nullification newspaper. In the fall of 1836 James Pinckney Henderson, a fellow North Carolinian already in Texas, persuaded Smith to move to the newly formed Republic of Texas.

Smith had a long and distinguished medical career. When he arrived in Texas in the spring of 1837 he became Sam Houston's roommate and close friend. Houston appointed him surgeon general of the Army of the Republic of Texas on June 7, 1837. In this role Smith set up an efficient system of operation and established the first hospital in Houston, a military institution. He also served as the first chairman of the Board of Medical Censors, which was established by the Second Congress of the republic in December 1837. During the devastating epidemic of yellow fever in Galveston in 1839, he treated the sick, published factual reports of the progress of the disease in the Galveston News, and, after the epidemic abated, wrote the first treatise on yellow fever in Texas. In 1848 Smith met with ten other Galveston doctors to begin working for the formation of the Medical and Surgical Society of Galveston. When the Texas Medical Association came into being in 1853, he was chairman of the committee that drafted its constitution and bylaws. He also may have served as an early president of the board of trustees of the Texas Medical College and Hospital after it was organized in Galveston in 1873. He served as president of the Texas Medical Association in 1881–82.

When Smith first came to Texas, Sam Houston quickly recognized his diplomatic ability and in 1838 sent him to negotiate a treaty with the Comanche Indians. In 1842 Smith traveled to Europe as the chargé d'affaires of Texas to England and France, a position he held from 1842 to 1844. He secured ratification of a treaty of amity and commerce between England and Texas and improved the republic's relations with France, which had been disturbed by the Pig War. He was also charged with working for friendly mediation by European powers to stop Mexican threats to reinvade Texas, with encouraging immigration to Texas, and with learning the attitude of Russia, Prussia, and Austria toward Texas. In addition, he investigated and reported to leaders in Texas and the United States activities of the British antislavery party, which seemed potentially harmful to Texas, and the fact that two steamers were being built in England for Mexico. In 1845, as secretary of state, Smith worked with President Anson Jones to give the people of Texas a choice between remaining an independent republic and being annexed to the United States of America. To this end, he negotiated a treaty with Mexico, by which that country acknowledged the independence of Texas. This treaty, known as the Smith-Cuevas Treaty, angered many Texans who were avid for annexation, and Smith was burned in effigy by citizens of Galveston and San Felipe. After Texas became a state Smith served three terms (1855, 1866, and 1879) in the state legislature as a representative from Harris County. As a legislator he supported measures to aid railroad construction, validate land titles, improve common schools, found the University of Texas, and pay off the public debt. He also helped to found the Democratic party in Texas, took an active part in county and state party meetings, and represented the party several times in Democratic national conventions.

Smith rendered further military service to Texas during the Mexican and Civil wars. During the former he was on active duty with Gen. Zachary Taylor in the field. When the Civil War began he organized a company, the Bayland Guards, which he drilled and trained. While leading this company, a part of Company C, Second Texas Infantry, at Shiloh, he received a severe arm injury and was cited for bravery, along with the rest of his company. He was promoted to colonel and named commander of the Second Texas Infantry, which he led in several engagements in Mississippi, including Corinth and the Tallahatchie River. During the siege of Vicksburg, he was in command of a vulnerable earthen fortification at one of the entrances to that city. After the surrender of Vicksburg, Smith was in charge of several positions in the vicinity of Matagorda Peninsula on the Gulf Coast of Texas, and was credited with preventing Union invasions in that area. Toward the end of the war he was put in charge of the defenses of Galveston. After the war he and William P. Ballinger were sent by Governor Pendleton Murrah as commissioners to negotiate peace terms for Texas with Union officials in New Orleans.

Smith devoted much time and energy to the cause of education, and he often urged that Texas underwrite the education of every child in the state. He was a charter member and first vice president of the Philosophical Society of Texas; one of that organization's first acts was to draw up a memorial to the Texas Congress urging the establishment of a system of public education in Texas. Smith served as superintendent of Houston Academy before the Civil War, and he was also a trustee at various times on a number of school boards in Houston and Galveston. He championed public education for blacks and women and was one of three commissioners appointed by Governor Richard Coke to establish an "Agricultural and Mechanical College of Texas, for the benefit of the Colored Youths." This school, located five miles east of Hempstead, is now Prairie View A&M University. Smith also helped organize Stuart Female Seminary (see STUART SEMINARY) in Austin and served as a trustee on its first board. He spent his last years in an unceasing effort to establish a state university with a first-class medical branch. As president of the University of Texas Board of Regents, established in 1881, he led the effort to recruit the best professors available for the university faculty and to set up a curriculum necessary for a first-rate institution of higher learning. He also served as president of the board of visitors to the United States Military Academy at West Point in 1848.

Smith was a powerful orator, many of whose numerous speeches were published in newspapers and as separate monographs. He was also an able and indefatigable writer. In addition to editing the Salisbury Western Carolinian, he served a brief stint (December 1839-January 1840) as guest editor of the Houston Morning Star. His writings were published in scientific, agricultural, educational, and general magazines and newspapers in the United States and Europe. His Reminiscences of the Texas Republic (1876) contains much valuable material pertaining to the early history of Texas. In 1869, when the Southern Historical Society was organized, Smith was named vice president for Texas, along with Gen. Robert E. Lee for Virginia and Adm. Raphael Semmes for Alabama. Smith's experiments and innovations in agriculture and ranching were recognized internationally. He published numerous articles based on firsthand observation of the climate, soil, vegetation, and wildlife in Texas, as well as his experiences raising livestock and crops on the Gulf Coast. In 1851 he was sent as Texas delegate to the Great London Exhibition at the Crystal Palace and was named one of the judges. In May 1852 he served as superintendent of the first fair in Texas, held in Corpus Christi. He was elected the first president of the Texas State Agricultural Society when it was formed in 1853. In 1876 he was appointed by the United States Centennial Commission to act as a judge on the Jury of Awards at the Great International Exhibition in Philadelphia, and in 1878 President Rutherford B. Hayes appointed him one of the two honorary commissioners from Texas to the Paris International Exposition, where he was named one of the judges of agricultural products. Smith never married. He died on January 21, 1886, at Evergreen, his plantation home on Galveston Bay. He is buried in the State Cemetery in Austin.

Handbook of Texas Online
Guide to the Ashbel Smith Papers