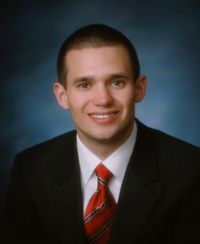 BRIAN J. HALEY was appointed as the first Student Regent to The University of Texas System Board of Regents by Governor Rick Perry on February 3, 2006. His term expires on February 1, 2007.

Mr. Haley, a law student at The University of Texas at Austin School of Law, plans to graduate with a Doctor of Jurisprudence degree in May 2008. He received his Bachelor of Arts in Government with a minor in Asian Studies from The University of Texas at Austin in 2004. Before attending law school, Mr. Haley worked for Dell, Inc. in China where he implemented key corporate customer initiatives for Dell's China business markets. He has also worked for Public Strategies, the International Trade Administration at the U.S. Department of Commerce, Congressman John Carter, and Salomon Smith Barney. In addition to his professional experience, he has spent time volunteering in India, Zambia, Brazil, and Russia.

As an undergraduate, Mr. Haley served as the Student Government President at The University of Texas at Austin, representing a student body of over 52,000. He was an active member of the Texas Union, the College of Liberal Arts Council, the International Student Council, and the Campus Crusade for Christ. In 2003, he was named the Most Outstanding Student by the University's Parents Association and won the Congressman J. J. "Jake" Pickle Award for Citizenship. He has published several articles and appeared on national television discussing higher education, particularly as it relates to global competitiveness. Mr. Haley currently serves as the vice-chair of the Texas Union Board of Directors, serves on Senator Kay Bailey Hutchison's Leadership 20/20 Committee, and as a Texas Exes Advocate for Higher Education. He has been a member of the Friar Society and the Texas Cowboys.

Mr. Haley is from Denton, Texas, where his father, Bob Haley, mother, Brenda Haley, and twin sister, Holly Hildebrand, reside. He is a graduate of Liberty Christian High School.

*Regent Haley graduated from The University of Texas at Austin School of Law with a Doctor of Jurisprudence degree in 2009.