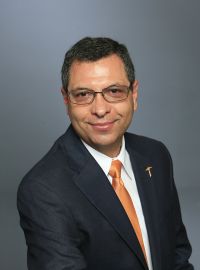 DANIEL R. DOMINGUEZ, El Paso, Texas, was appointed as Student Regent for The University of Texas System Board of Regents by Governor Greg Abbott for a one-year term that began on June 1, 2019.

Mr. Dominguez is a student at The University of Texas at El Paso (UTEP), studying for his Doctoral degree in Educational Leadership and Administration. He is a graduate of the Instituto Tecnolόgico de Ciudad Juarez, Mexico with a bachelor’s degree in accounting (1987), and he also holds a Master of Science in Economics (1997) and a Master of Business Administration (2005), both from UTEP. He has over 28 years of professional experience working in private industry, primarily in the manufacturing industry, and has worked for the last four years at UTEP.

He is an active member of the El Paso Chapter of the Institute of Management Accountants and volunteers as a presenter to campus students seeking to pursue professional accounting certification.

Mr. Dominguez and his wife, Maria Esther, recently celebrated their 30th wedding anniversary, accompanied by daughters, Alba and Daniela, all of whom are proud UTEP graduates. He also enjoys reading, traveling and playing competitive tennis.