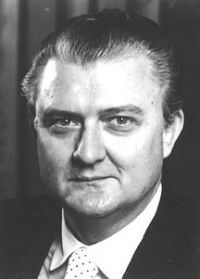 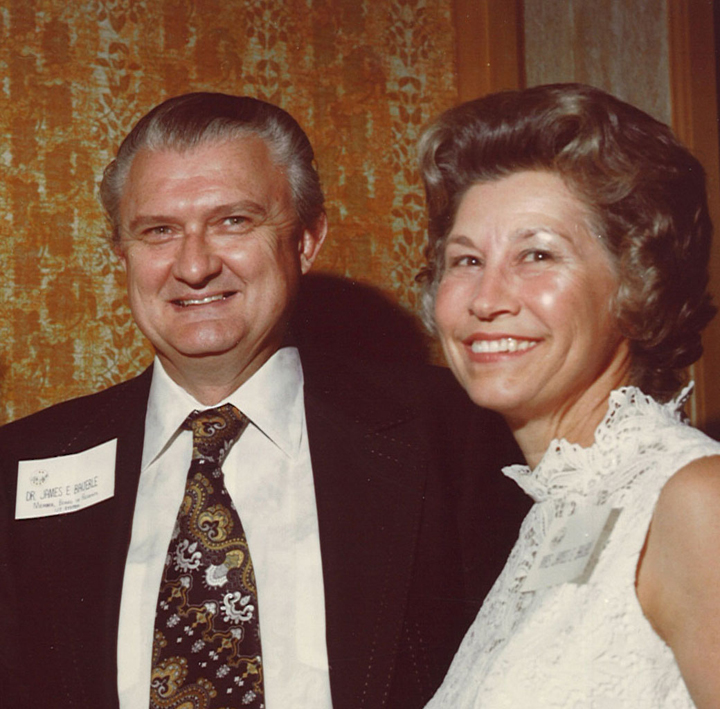 Curriculum Vitae as of April 1974

PROFESSIONAL ORGANIZATIONS WITH DATE OF ENTRANCE

Diplomate, American Board of Oral Surgery, 1959

Member, Board of Regents, The University of Texas System (six-year Term beginning in January 1973)

Member, American Buffalo Association (Has raised Buffalo at his Johnson City Ranch since 1962)

Intense student of the Old West

CASTLE HILLS - If the "BEWARE: Attack Secretary" sign on the reception window doesn't offer a clue that James Bauerle's office is not the average dentist's office, then the large picture inside the door of an outlaw cowboy holding a double-barrel shotgun saying "The Doctor Will See You Now" should do the trick.

Bauerle is an oral and maxillofacial surgeon. He runs a thriving practice at three San Antonio locations and said he won't think about retiring until he turns 85.

"A lot of people used to die from dental problems not very long ago. Dental conditions and infections can become deadly serious," Bauerle said. "I like that I help relieve patients from one of the most painful conditions that exists."

His main office in Castle Hills holds awards from every major professional dental association in Texas. He served as the Gold Medal Award-winning president of the Texas Dental Association, president of the San Antonio District Dental Society, a Consumer Research Council of America Top Dentist, 1974 Texas Dentist of the Year, Delegate Host of the Texas Dental Leaders People-to-People Delegation to a dozen countries, and is even an honorary Texas Ranger and Bexar County deputy sheriff.

Bauerle still is a full professor of oral surgery and dentistry at the University of Texas Health Science Center Dental School — the San Antonio school he was instrumental in founding in 1969 with the help of then-Gov. Preston Smith. He received a UTHSC Medallion Award for his role in the project, and James Bauerle Boulevard at the University of Texas at San Antonio's Loop 1604 campus was named in his honor.

Bauerle, who was brought up in the Johnson City area, said his parents instilled a strong work ethic in him at an early age. He graduated from high school at 15 and from the University of Texas at Austin College of Pharmacy at 19. Bauerle entered the Army and was given the option of entering dental or medical school due to a shortage of doctors and dentists during World War II. He studied oral surgery and was commissioned as a captain in the Army Dental Corps.

"I decided that I didn't want to be a surveyor like a regular dentist or orthodontist, but I would take on the heavy construction of oral surgery," he said, pumping his fist.

During a recent busy afternoon in his office, Patricia Boyd Contreras, a longtime pharmacist and friend of Bauerle, praised the oral surgeon when she brought her 9-year-old daughter, Jillian, to have a baby tooth pulled.

"He has been such an inspiration to me. I never forgot how he told me to keep all my books and read them. I have books everywhere because of him," said Contreras, a former patient.

Bauerle's Castle Hills' office can be an overwhelming sensory experience for visitors. The office is filled with Western art and bronzes, artifacts signed by historical figures including Santa Anna, vintage Tiffany lamps and hunting trophies. "People always ask me when I will start advertising my office as a museum and start charging admission," he said with a chuckle. "They call me a curator, but I consider myself just a collector. I see it. I like it. I purchase it."

Each examination room plays jazz or big-band music and features a different theme.

The "travel room" is filled with Asian décor, the "trophy room" holds numerous awards, and his "UT room" is a tribute to his tenure on the University of Texas at Austin Board of Regents from 1973 to 1979, complete with burnt-orange colors and pictures and statues of Bevo, the university's longhorn mascot. His personal office features correspondence from Lady Bird Johnson, President George W. Bush and former patient Bess Truman, wife of President Truman.

Bauerle raised buffalo on his family's Johnson City ranch. He has buffalo paintings, jawbones and a giant stuffed head in a tribute to his favorite livestock.

Vicky Salinas, his longtime dental assistant, has gotten used to the art-packed office. "He can tell you the story behind each piece, and no matter how full a wall looks, he always manages to find one more little spot of white space," she said.

Bauerle said when people ask him why he is such a good oral surgeon, he always answers with one word — experience. "I then tell them that one can't swim the English Channel by just reading a book on swimming. That always gets the point across," he said.