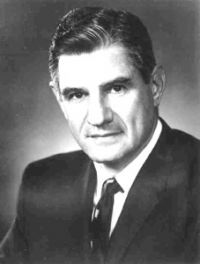 JOE M. KILGORE was born in Brown County, Texas, December 10, 1918, the son of William Henry and Myrtle Armstrong Kilgore; moved to Mission, Texas, in 1929; was educated at Westmoorland College (now Trinity University, San Antonio, Texas and The University of Texas at Austin.

He enlisted in July of 1941 in the United States Air Corps and served in the Mediterranean Theater of Operations as a combat pilot; separated from the service in 1945; was awarded the Silver Star, Distinguished Flying Cross, Air Medal with oak leaf clusters and other decorations; and presently holds the rank of Major General in the Air Force Reserve (Retired).

Mr. Kilgore returned to McAllen and practiced law in Edinburg until sworn in for the Eighty-fourth Congress.

In 1945, he married Jane Redman of San Antonio and they have three sons: Mark, Dean and Bill; and a daughter: Shannon. They are members of the Methodist Church. Mr. Kilgore was elected to the Texas House of Representatives in 1946, served as chairman of the Judiciary Committee, and was re-elected in 1948, 1950 and 1952. He was elected to the 84th Congress November 2, 1954, re-elected to the 85th, 86th, 87th and 88th Congresses and retired from Congress at the end of the 88th Congress to re-enter private practice as a partner in the firm of McGinnis, Lochridge and Kilgore, Austin, Texas (now McGinnis, Lochridge & Kilgore).

Remembered by a colleague as one of the most ethical and caring persons he ever knew, Joe M. Kilgore, a former UT System Regent and U.S. Congressman, died Wednesday following a stroke at the age of 80.

"He cared immensely about the University of Texas and always did what he could to help that institution," said Bill Bingham, a partner with Kilgore in the Austin law firm McGinnis, Lochridge & Kilgore, L.L.P.

Kilgore, a graduate of the UT School of Law and a member of the Texas House of Representatives, was a major general in the Air Force Reserve. Liz Carpenter, a friend of Kilgore's from his days as a UT student in the late 1930s, said he was very active in campus politics. "He was a forever friend, always there if you called him about anything," Carpenter said. "I have so many memories, when we were all active in politics."

Carpenter, who served as the first woman vice-president of the UT student body, said Kilgore was a "big man on campus." "It was a time of spirited campaigns and high hopes for public service," Carpenter said in a written statement. "Joe was one of the best." Kilgore entered the U.S. Air Corps in 1941, where he served in the Mediterranean theater as a combat pilot. He was awarded the Silver Star, the Legion of Merit, the Distinguished Flying Cross and an Air Medal with oak leaf clusters. He was admitted to the state bar in 1946 and practiced law until he was elected to the Texas House that year. He served as a legislator until 1954, when he was elected to Congress. Kilgore retired from Congress after five consecutive sessions to practice law in Austin as a partner for McGinnis, Lochridge & Kilgore, L.L.P. "I will remember his advice on literally hundreds of issues -- he was always ready with advice and it was always excellent," Bingham said. "I think what sticks out most is his genuine interest in people and how many people all over the world knew him and counted on him for assistance and advice."

Kilgore was named a UT System Regent in 1967 by Gov. John Connally, a post he served until 1973. He was a past president and life member of the Ex-Students' Association. He was named a Distinguished Alumnus of the University in 1982. "He was one of the smartest men I ever knew and one of the most genuine," said George Christian, an Austin political consultant and former press secretary for President Lyndon B. Johnson. "He was a warrior when times demanded it, but his outlook and demeanor were gentlemanly and caring."

Kilgore is survived by his wife, Jane; three sons, Mark, Dean and William, and a daughter, Shannon. Services will be held at the University Methodist Church Saturday, Feb. 13 at 3 p.m. Burial will follow at the Texas State Cemetery.