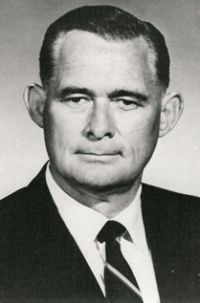 John Peace, San Antonio attorney, has served since 1967 on The University of Texas Board of Regents, under appointment of Governor John B. Connally. He was elected Chairman of the Board in March, 1971, and will complete his term as Regent in 1973.

A native of Wharton, Texas, Mr. Peace has lived in San Antonio since 1939. He received the Bachelor of Laws degree from The University of Texas in Austin. Active in civic affairs, he currently serves as a director of the San Antonio Live Stock Exposition, the Texas Law Enforcement Foundation, and the Sam Rayburn Foundation. Previously, he served as chairman of the Texas Public Safety Commission.

Mr. Peace is married to the former Ruby McGee, and they are the parents of three children: Mrs. John Thomas, Mrs. Martha Whittington, and John Peace III.