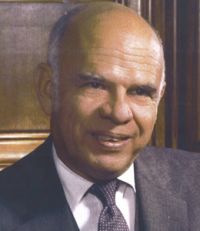 Mario E. Ramirez, M.D. of Rio Grande City was appointed to a six-year term on the Board of Regents of The University of Texas System by Governor William P. Clements in February 1989. He was elected Vice-Chairman of the Board in March 1991.

Upon his licensure in 1950, Dr. Ramirez opened an office in Roma, Texas, on April 21, 1950, for the practice of family medicine and remained there until January 20, 1975, except for the two years he served in the U. S. Air Force from 1955 to 1957. He moved his office to Rio Grande City in January of 1975 and continues to practice family medicine in that location.

Dr. Ramirez is a diplomat of the American Board of Family Practice and a fellow of the American Academy of Family Physicians. He attended public schools in Roma and graduated from high school in Rio Grande City in May 1942. Dr. Ramirez attended The University of Texas at Austin from June 1942 to January 1945 and was scheduled to receive his B.A. degree in May 1945. However, he was offered early admission (January 1945) by the University of Tennessee College of Medicine and received his M.D. degree in June 1948. He served a rotating internship at Shreveport Charity Hospital, Shreveport, Louisiana, from July 1948 through June 1949 and followed this with a general practice residency.

He has served U. T. Austin as a member of the Public Affairs University Relations Committee of The Ex-Students' Association, The President's Associates, the Centennial Commission, and the Development Board.

Dr. Ramirez has been actively involved with many professional medical organizations and has shown special interest in matters related to the delivery of medical care for the disadvantaged. His dedication and wise counsel have resulted in several major recognitions including the Distinguished Service Award from the Texas Academy of General Practice and the Texas Medical Association, the Distinguished Alumnus Award from The University of Texas, Outstanding Leadership Award from the Texas Academy of Family Practice, the Bicentennial Dr. Benjamin Rush Award for citizenship and community service from the American Medical Association, and the "Family Doctor of the Year" Award presented by the American Academy of Family Physicians.

He has been commencement speaker at both the U. T. Medical Branch-Galveston and U. T. Austin.

Since 1974, Dr. Ramirez has served on the Board of Blue Cross and Blue Shield of Texas and has been a Director of The Valley Federal Loan and Savings Association since 1976. He has been a member of the Texas Medical and the American Medical Associations since 1950.

Among his many appointments and elected positions, Dr. Ramirez has served locally as Starr County Health Officer and County Judge; a member of the South Texas Development Council; Council for South Texas Economic Progress; and Medical Director of the Starr County Mental Health and Mental Retardation. Statewide he has served in such capacities as a member of the Governor's Committee on Mental Retardation and Committee on Tuberculosis; Medical Care Advisory Committee of the Department of Public Welfare; Greater South Texas Cultural Basin Commission; and the Texas Higher Education Coordinating Board. On the national scene, Dr. Ramirez has served on the Ad Hoc Committee on Health Professions; the National Health Advisory Council; and was appointed in 1985 by President Reagan as a Regent on the Uniformed Services University of the Health Sciences.