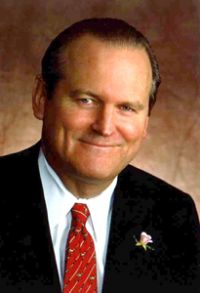 PATRICK C. OXFORD, a Houston attorney and business leader, was appointed to a six-year term on the Board of Regents of The University of Texas System by then Governor George W. Bush, effective February 1, 1997. He currently serves as Chairman of the Health Affairs Committee and is on the Academic Affairs Committee and Finance and Planning Committee.

Mr. Oxford is Managing Partner of the law firm of Bracewell & Patterson, which he joined in 1967.

Mr. Oxford was born in Beaumont. He earned two degrees from U. T. Austin, a B.B.A. with honors in 1966 and a J.D. with honors in 1967. He was managing editor of the Texas Law Review from 1966 to 1967 and was selected for membership in The Friar Society, the University's oldest and highest honor society.

Mr. Oxford and his wife, Katie, have two daughters.

Letter from the Chairman