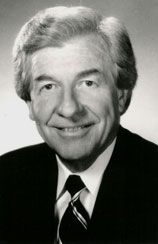 ROBERT J. CRUIKSHANK of Houston was appointed to a six-year term on the Board of Regents of The University of Texas System by Governor William P. Clements in February 1989. He was elected Vice-Chairman of the Board in March 1991.

Mr. Cruikshank was born in Lake Charles, Louisiana, on September 12, 1930, the son of Mrs. Salmon Wright and the late Louis James Cruikshank. He graduated in 1951 from Rice University with a Bachelor of Arts Degree and then served four years as an officer in the United States Air Force. He also completed the Advanced Management Program at Harvard University in 1982. Since qualifying as a Certified Public Accountant in 1959, he has served on many professional committees, as an officer of the Houston Chapter of the Texas Society of CPAs, and as a member of the AICPA, the national organization of accounting professionals. Mr. Cruikshank has also been a visiting lecturer in accounting at Rice University.

He currently serves as a member and/or office of the governing boards of a number of community and civic organizations including the Texas Children's Hospital, the Institute of Religion, the Fish Foundation, the Museum of Science, the M.D. Anderson Board of Visitors, Advisory Councils associated with The University of Texas at Austin and Rice University, Greater Houston Partnership and others related to the cultural and fine arts programs in the Houston area.

Mr. Cruikshank also served Governor Clements as Chairman of the Governor's Task Force on Accounting, Auditing and Financial Reporting for the State of Texas and Mayor Whitmire of Houston as Co-Chairman of the Mayor's Task Force on Drug Abuse. He has been especially active in the Houston, Texas and American Heart Associations and has received the highest award for distinguished service from each of these organizations.

The terms of three UT System regents who have devoted part of their work to the advancement of minorities ends Wednesday. "There has been a heavy emphasis placed on recognizing the need for diversification," said outgoing regent Robert Cruikshank. Cruikshank, Dr. Mario Ramirez and former U. S. Rep. Tom Loeffler will end their six-year terms on the board, where they shared jurisdiction over the system's $4 billion budget with six other regents.

Gov. George W. Bush has not yet appointed replacements for the outgoing regents, but one UT administrator speculated that Loeffler, who worked closely with Bush during his campaign, will be reappointed. The governor's office has been overloaded with new appointments and has not had time to name new regents, said Bush spokesman Ray Sullivan. The outgoing regents will remain on the board until appointments can be made, he added. All three were appointed by former Gov. Bill Clements, a Republican. During the six years Cruikshank spent on the Business Affairs and Audit Committee, the board saw an increase of millions of dollars in purchases from historically underutilized businesses, said Lewis Wright, associate vice chancellor for business affairs. The Historically Underutilized Businesses program is a legislatively required plan to increase the number of state contracts awarded to companies owned by women or minorities. HUB purchases increased by 51 percent from fiscal year 1993 to 1994, to a total of $90.3 million.

Cruikshank said of his time on the board, "It's one of the most enjoyable experiences I've had come my way in my adult years." Ramirez, chairman of the Health Affairs Committee, has been active in minority recruiting and retention, and has met with minority students and faculty groups throughout the system, said Art Dilly, executive secretary of the board. Ramirez said his years on the board have been wonderful and very productive. The board has seen a big effort to place more doctors in rural areas, he said. Ramirez practices family medicine in Rio Grande City. The Health Affairs Committee dispenses about half of the $4 billion budget that the board has jurisdiction over to the six medical schools in the UT System, Dilly said. The regents have restructured many of the system's medical institutions in order to be competitive in the market-driven health business, Cruikshank said.

Cruikshank served four years as chairman of the Asset Management Committee, which is responsible for the system's investments, during the time the committee restructured the investments, he said. Cruikshank, a retired public accountant and Houston resident, said he found the job as chairman challenging. Loeffler, a Republican, has been "the system's eyes and ears and sounding board and door-opener for us in our nation's capital," Dilly said. The former congressman and graduate of the University currently works as a lobbyist at the federal level, Dilly added. Loeffler was in Washington, D.C., Tuesday and could not be reached for comment. He was one of the youngest members of the board and served as chairman of the Business Affairs and Audit Committee. "I don't think any university has been served more capably than by these people," said board Chairman Bernard Rapoport. "Everybody forgets everything about politics. Everyone thinks about what is best for those 150,000 kids at the universities."

The nine regents are appointed by the governor for six-year terms. Terms are staggered, so that every two years, three of the regents can be replaced. The new regents will spend a year or two learning the complexities of the UT System, Dilly said. The board's unspoken policy is that no new members serve as chairs of the board or of committees, he added. Cruikshank said he has seen amazing dedication on the part of the regents. "Being a regent will take as much time as anyone wants to devote to it," Dilly said.