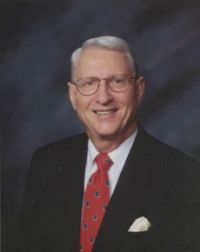 In early February 1997, he was appointed by the Governor and confirmed by the Senate to serve as a member of the Board of Regents of The University of Texas System for a six-year term ending February 1, 2003. At the request of the Governor, Regent Riter continued to serve on the U. T. Board of Regents until his death on September 23, 2003. He was a Vice-Chairman of the U. T. Board of Regents and a member of the Finance and Planning Committee; the Facilities Planning and Construction Committee; and the Student, Faculty, and Staff Campus Life Committee.

Mr. Riter was an elder and trustee in the First Presbyterian Church of Tyler and had been involved in all phases of church work. He served as a Sunday school teacher, deacon, elder, and trustee and had always supported the ministries of that church when called upon. He was a former member of the board of directors of Grace Union Presbytery and was a past chairman of the Committee on Stewardship for the Presbytery. He actively participated in a non-denominational men's Bible study group that had met weekly for the past nineteen years.

He was married to the former Betty Jo Baxter, and they have two children - Mrs. Melinda Shoemaker and Whit Riter, both of whom reside in Tyler. Whit is associated with his father as a general partner in Pinstripe Investments and Melinda is a homemaker.

Mr. Riter received the W. C. Windsor Award as Tyler's Most Outstanding Young Man of the Year in 1958 and the T. B. Butler Award as Tyler's Most Outstanding Citizen of the Year 1968. In 1987, he was the recipient of the Patriot of the Year Award from The University of Texas at Tyler. In September of 1994, he and his wife were recipients of Tyler's All Saints Episcopal School "Flame of Excellence" award. In 1985 he was inducted into the Hall of Fame at New Mexico Military Institute. In addition, the Texas Chamber of Commerce named him East Texan of the Year for 1992. In 1993 he received a special citation from the Texas Industrial Development Council in recognition of outstanding leadership in economic development for the State of Texas. The East Texas Communities Foundation recognized him as the Outstanding Volunteer Fundraiser in 1996.

He served as a Class A Director of the Federal Reserve Bank of Dallas from 1969 to 1974 and was a past chairman and member of the Advisory Council of Financial Institutions for the Federal Reserve Bank of Dallas. He was active in Texas banking for a number of years, serving as president of the Texas Bankers Association for the year 1984-85, the TBA's centennial year. He was a life member of Robert Morris Associates, the national association of bank loan officers, and served as president of the Texas Chapter of RMA in 1960. He was also active for a number of years with the American Bankers Association, serving several years on the Governing Council and various committees, and served a two-year term as State Vice President from Texas. He also served as a member of the Comptroller of the Currency's Regional Advisory Committee on Banking Policies and Practices.

Tyler community and educational leader, A.W. "Dub" Riter Jr., who served as a University of Texas regent and was a retired banker, died Tuesday night. He was 79.

In early February 1997, he was appointed by Gov. George W. Bush to serve as a member of the Board of Regents of The University of Texas System for a six-year term ending Feb. 1, 2003. He was asked by Gov. Rick Perry to extend his term through the legislative session. He was a vice-chairman of the UT Board of Regents and a member of the Finance and Planning Committee; the Facilities Planning and Construction Committee; and the Student, Faculty and Staff Campus Life Committee.

Riter retired as senior chairman of the board for NCNB, now Bank of America, on Sept. 30, 1988. He served as chairman of the board and chief executive officer since October 1973. Dr. Rodney Mabry, UT Tyler president, said Riter would be greatly missed by the university and his friends. "It's a sad day for Tyler and for The University of Texas at Tyler. He was not only a regent who was friends with governors and now a president, but he was the heart and soul of the university the last several years," he said. Mabry said no meeting was too small for Riter's full attention and he paid attention to the smallest details helping wherever he was needed. "Nothing was too small for him to come to if it was going to help the university. His handprints in a very loving way were on every project we undertook. He was both the spark plug and the engine," he said.

Riter and his wife, Betty Jo, donated a $1.35-million gift to UT Tyler to create The Dub and B.J. Riter Millennium Carillon Tower and Plaza. Riter also served as chairman of the University of Texas Health Center at Tyler Development Board and the UT Tyler Development Board. Additionally, he was a past president of the UT Tyler Educational Foundation, Inc. and the Texas Chest Foundation, according to an UT biography.

Riter also served as a member of the board of directors of TCA Cable TV Inc., now Cox Communications, and as president and board member of the Tyler Economic Development Council from 1988 to 1991. This year, Riter received the Business Hall of Fame honor from Junior Achievement of Greater Tyler. He was a charter member of the local JA board. He received the W.C. Windsor Award as Tyler's Most Outstanding Young Man of the Year in 1958 and the T.B. Butler Award as Tyler's Most Outstanding Citizen of the Year 1968, according to a University of Texas biography. Additionally, in 1987, he received the Patriot of the Year award from UT Tyler. In 1994, Riter and his wife, Betty Jo, received the All Saints Episcopal School "Flame of Excellence" award. In 1985, he was inducted into the New Mexico Military Institute Hall of Fame, according to the biography. At the state level, he was a life board member of the Texas Research League, having served as its treasurer for six years; he served two terms as president of the Texas Association of Taxpayers; and he is a past board member of the Texas Chamber of Commerce, having served as vice chairman for Administration and Finance for that organization.

Riter Center for Advanced Medicine is dedicated at
U. T. Health Center at Tyler Tuesday, June 07, 2005

With hundreds of orange and blue balloons soaring across the sky, The University of Texas Health Science Center at Tyler on Friday dedicated the new Riter Center for Advanced Medicine.

The late A.W. “Dub” Riter, Jr., was a long-time supporter of UTHSCT. He served on UTHSCT’s Development Board and was chairman of the board from 1992 until August 2003. He was appointed to The University of Texas Board of Regents in 1997 and was still a regent when he died Sept. 23, 2003.

“This is a historic day for the Health Center. It is a great honor for us that this building, the former Ambulatory Care Center, will bear the Riter name,” UTHSCT President Dr. Kirk A. Calhoun told the crowd of about 150 people seated under a tent in front of the Riter Center.

“We’re naming this building for Dub Riter because we respect him and we love him. We care immensely about this man and about this facility. Dub Riter was the epitome of servant leadership, accountability, diversity, and excellence, the core values of the Health Center,” Dr. Calhoun said.

The Riter Center is a four-story, 100,000-square-foot building with 15 clinics, 99 exam rooms, and 13 procedure or treatment rooms. In 1997, it cost $12.8 million to construct the four-story building and finish out the first two floors, leaving the third and fourth floors empty shells. The third floor was finished and opened in May 1997.

Whit Riter, the son of Regent Riter, said his father had a vision for UTHSCT: to be a top-tier medical and research institution. That vision is becoming a reality, he said.

“UTHSCT now is researching pulmonary fibrosis, which is the disease that took dad,” Whit Riter said. In pulmonary fibrosis, the lungs become scarred, and patients with this condition have difficulty breathing. Many times its causes are unknown, though it tends to affect older people.

“What people here are doing in research will put a mark on this city and will put a mark on our family’s heart. Thank you for this honor,” he said. Herbert Buie, chairman of the UTHSCT Development Board, said “Dub Riter was a model leader. He and his leadership are sorely missed in this community. “He wanted health care for everyone, he wanted education for everyone, he wanted a spiritual walk of their choosing for everyone. His heart was to help people,” the development board chairman said.