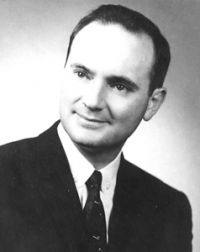 PERSONAL
Born: September 1, 1927, Amarillo, Texas
Father: Wales H. Madden, Amarillo attorney (deceased) A Harvard graduate, was actively involved in the legal practice and in the community. He served as Regional Chairman of the War Labor Board in World War II.
Mother: Kathryn Nash Madden (deceased)
Grandfather: S. H. Madden was the first District Attorney in Potter County and successfully negotiated in Chicago in the 1880s with Santa Fe Railway to bring its line thru Amarillo destined for the West Coast.

EL PASO - Wales H. Madden Jr., a statewide civic leader and a former member of the Board of Regents of the University of Texas System, will receive the U.T. System's highest honor, the Santa Rita Award, the board announced Thursday (Aug. 8).

Madden, an Amarillo lawyer who currently serves as chairman of the Texas Water Development Board, will be presented with the award at a dinner to be scheduled this fall. He will be only the 17th person to receive the award, which recognizes extraordinary contributions to the U.T. System and Texas higher education generally. "The Santa Rita Award is carefully reserved for those whose personal commitments, leadership, and example undeniably enhance the mandate of the Constitution of the State of Texas 'to establish, organize and provide a University of the first class,'" said Charles Miller, chairman of the Board of Regents. "Certainly Wales Madden more than meets these criteria. He has served the U.T. System in numerous capacities with the greatest distinction for more than 50 years. Texas higher education has no more loyal friend and no more visionary supporter."

Madden, 75, served on the Board of Regents from 1959 to 1965. He has the distinction of being the youngest person ever appointed to the board, having been 32 when appointed by Gov. Price Daniel.

In addition to service related to the U.T. System, Madden has been a regent of Amarillo College, a trustee of Trinity University in San Antonio, and a member of a planning committee at West Texas A&M University in Canyon.

Madden earned two degrees from U.T. Austin - a bachelor's degree in 1950 and a law degree in 1952. He was the student body president in 1951. The Ex-Students' Association named him a Distinguished Alumnus in 1979.