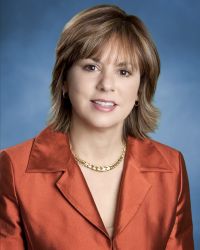 Randa S. Safady serves as The University of Texas System’s vice chancellor for external relations, communications, and advancement services.  She is a member of the chancellor’s executive management team.

As the system’s chief advancement and communications officer, Safady works with the chancellor, UT’s thirteen academic and health institution leaders, and Board of Regents on responsibilities involving philanthropy administration and strategy, capital campaigns, naming policies, and endowment compliance.  She is also responsible for collaborating with and providing counsel to UT institutions on communications issues and crisis management, media relations, and marketing/branding.

Safady currently serves as board chairman of the Austin Community Foundation and previously served as its vice chairman and chair of the governance committee.  She is president-elect of the Headliners Club of Austin, a board member of the Austin Crime Commission, Music Treatment Foundation, UT Foundation, and UT Austin LBJ School’s RGK Center for Philanthropy and Community Service.  She is a member of the Philosophical Society of Texas.

She has been the recipient of Texas State University’s College of Liberal Arts Distinguished Alumnus Award, the Austin Business Journal’s Women of Distinction Award, the UT Austin Moody College of Communication’s Robert Jeffrey Award for Distinguished Service, and St. Edward’s University’s Presidential Medallion.  Safady created and served as executive producer of State of Tomorrow—a statewide PBS series that featured the impact of universities’ research on society. The series garnered five EMMY awards from the National Academy of Television Arts and Sciences’ Lone Star division and the top national media award from the American Academy of Nursing.

Safady received her bachelor’s and master’s degrees from Texas State University and a Ph.D. in higher education administration from The University of Texas at Austin.  She has served in the higher education/health care advancement and communications profession for almost 40 years.